It’s no big secret that dogs have an excellent sense of smell – certainly much better than our human noses.

But it might come as a surprise that a dog’s olfactory abilities are so great that he can potentially sniff out cancer in humans.Dogs can be trained to be cancer-sniffing wizards, using their sensitive noses to detect cancerous fumes wafting from diseased cells. Of course, when you consider the numbers, it makes sense that a dog’s nose is capable of such a feat… 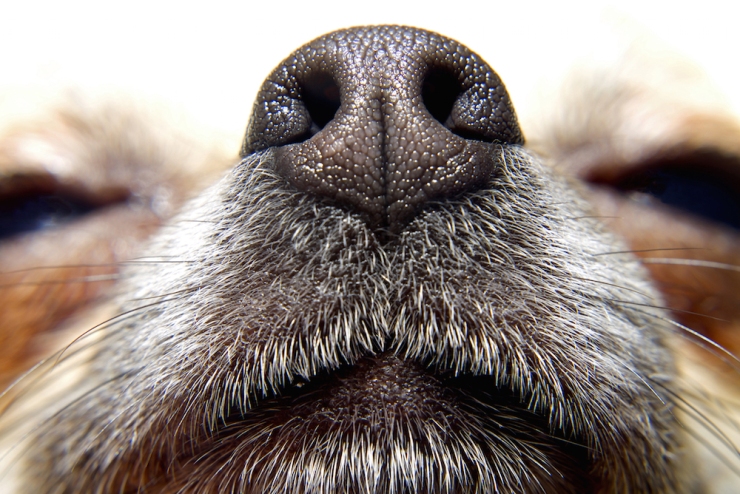 Dogs have 25 times more smell receptors than humans, boosting their smelling ability by 100,000 times. The brain of a human is dominated by the visual cortex, but the brain of a dog is controlled by the smell or olfactory cortex, which is approximately 40 times larger than that of a human. Furthermore, the olfactory bulb in a dog has a large number of smell-sensitive receptors, which range between 125 to 220 million, and it is a hundred thousand to a million times more reactive than that of humans.
Dogs do well in engaging situations, such as helping law enforcement track scents or guiding search-and-rescue teams in disaster areas. But sniffing thousands of samples in which only a handful may be cancerous is challenging work with little positive reinforcement.Moreover, it takes time and energy to train these pups.
OK, dogs have a great sense of smell. We get it. But how does that translate to being able to detect cancer?

Studies of dogs and cancer detection are based on the fact that cancerous cells release different metabolic waste products than healthy cells in the human body. The difference of smell is so significant that the dogs are able to detect it even in the early stages of cancer. Dogs are able to identify the chemical traces in the range of parts per trillion. Some studies have confirmed the ability of trained dogs to detect the skin cancer melanoma by just sniffing the skin lesions. Furthermore, some researchers have proven that dogs can detect prostate cancer by simply smelling patients’ urine. Dogs may also be able to sniff out the presence of cancerous cells through a human’s breath.
The ability of dogs to detect cancer has great potential benefits. Some researchers believe the trained dogs will become integrated directly into patient care, while other researchers recommend the skills of the cancer-detecting dogs be confined to the laboratories, where the gas chromatographs could be used to isolate the specific compounds that are identified by the dogs. Recent developments in this area include a simple breathalyzer that can change color according to the compounds in the breath indicating the presence of cancer.

Medical Detection Dogs, a charity which works with NHS trusts and universities, has had approval from Milton Keynes University Hospital for more trials.Its first study showed specially trained dogs can detect prostate cancer in urine in 93% of case.

This sniffing is noninvasive and could help diagnose countless people, which begs the question: If these pups are so olfactorily astute, why aren’t they screening people for cancer right now? Well now, the trial is successful and many studies show the proof.

Still not sold on the idea? Let the research speak for itself. Here are some studies showing the great cancer-sniffing abilities of dogs:

1.A study conducted in Amersham, England and published in the British Medical Journal, researchers tried to find out if dogs could be trained to identify bladder cancer solely based on urine odor. The dogs used in this study were able to correctly identify bladder cancer in the urine 41 percent of the time.
2.In a research study conducted by the Pine Street Foundation, breath samples of 31 breast cancer patients, 55 lung cancer patients and 83 healthy people were presented to five trained scent dogs (three Labrador retrievers and two Portuguese water dogs). These dogs were able to detect or rule out breast and lung cancer, at all stages of the disease, with approximately 90 percent accuracy.
3.An expert in melanomas, Dr. Armand Cognetta of Tallahassee,studied whether dogs could detect skin cancer and enlisted the help of a dog trainer. With the samples of melanomas, he worked to train a dog to sniff out the skin cancer. George, the dog used in the study, was able to detect the melanoma approximately 99 percent of the time. Furthermore, this research proved that George could successfully detect the malignant melanoma lesions from the benign lesions in patients.
4.According to S. News & World Report, a black lab named Marine was able to detect colon cancer in a study of 200 humans suffering from this disease with an incredible 97 percent accuracy rate. This dog was even more accurate than the routine fecal occult blood tests by approximately 25 percent. He was able to pick up early-stage signs of cancer and advanced malignancies.
5.According to a recent study published in the European Respiratory Journal, four trained dogs (one Australian shepherd, two German shepherds and one Labrador) correctly identified lung cancer in 71 of 100 samples from lung cancer patients. These dogs also ruled out cancer in 372 of 400 samples that were known not to have the cancer. That’s a very low rate of false positives – about 7 percent.
6.In Milan, the colleagues of Gianluigi Taverna of Humanitas Research Hospital took urine samples from 320 men with prostate cancer and 357 without it. The men with cancer had different stages of the disease from low-risk tumors to high-risk tumors. In the non-prostate-cancer group, some of the men also had other diseases, including other types of cancer. Two dogs were used for this study. Taken together, both dogs had an accuracy rate of 98 percent, which the team reported to the annual meeting of the American Urological Association. 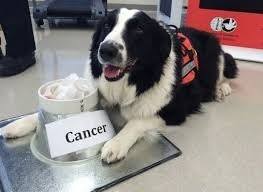 3 thoughts on “The Canine Cancer Detectives🐕”